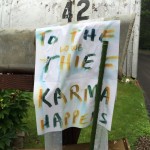 In this sophomore year, Dawson fell under the sway of the professor who taught a class in terrorism through the International Studies Department. He found the class by accident. It met at the right time (4pm Tuesday and Thursdays) and counted towards his humanities requirements.

Right from the beginning, the Professor had this way of making his students feel they were getting the real deal, information to which the average citizen didn’t have access. The feeling of being in the know was addictive. Dawson, in the spring of his sophomore year, declared his major in International Studies. His proud parents thought he was training for a career in Foreign Service, but Dawson was hoping to become a spy, which, he was told repeatedly, would not be a glamorous life but rather a noble one. In other words, he could die, which made it all the more exciting.

Proud that he was stepping out from the long shadow of his parents, his childhood and his thwarted love affair with sports, he left school for a summer internship in Washington D.C. He was there long enough to master the subway system and discover the best falafel joint in town.

At night, he was lonely. Eventually, he found the local batting cage. Regardless of when he arrived, there was always a long wait. When it was finally his turn, the heckling from the people behind him in line was well…intimidating, far worse than his two cousins yelling at him during their time together at the lake. So, Dawson trolled the books shops and read graduate level textbooks on Terrorism. He read weighted studies of common techniques employed by terrorism units in the field. He read about the best way to conduct an interview with a suspect. Determined to put what he had learned into practice, he headed to the best falafel joint in town to interview the owner, a young guy from Jordan. Dawson surveyed the place, charting the ebb and flow of customers and support staff. He kept fastidious notes in the style suggested by the textbooks. He also never jotted down a word when he was in the public eye. If he feared he might forget something, he headed to the men’s bathroom, which was at least twice an hour. By August, the charm of falafel and all the other offerings on the menu had long faded. But to keep up appearances, he ordered one of the five dinner options and nibbled at his meal just so he could blend in.

Dawson developed an allergy to chickpeas. At first it was just a modest rash. Soon the rash grew to cover half his face. Still, Dawson didn’t let up. Every night at around 8:42 or 8:46, a gentleman would arrive carrying a heavy grocery bag. The owner greeted him warmly and led his guest to the kitchen. They’d emerge ten to twelve minutes later, faces flushed. But the grocery bag was nowhere in sight.

Certain that he was onto something, Dawson phoned in a tip to Homeland Security. Since he wanted to be a player, he left his name. A few days later, an Agent from Homeland Security paid him a visit at work.

As he crossed the hallway of the Capital Building to meet with this Agent, Dawson was picturing home plate, his fingers wrapped around the neck of the bat and how good that felt. The Agent was a steel gray fellow. With no hint of a smile, or warmth, he lectured Dawson on the dangers of violating other citizens’ rights. He didn’t sit down on a bench or offer Dawson a cup of coffee, instead, he stood stern and locked eyes with Dawson, sounding very much like a disapproving judge. “When neighbors make a practice of spying on their neighbors, we, as a people, suffer.” Dawson tried explaining to the Agent that he was majoring in Terrorism at college, but this information did little to soften the Agent’s demeanor. Still dripping with disapproval, he told Dawson that mistakes have consequences. And now, thanks to his ill-considered espionage exercise, both Dawson and the proprietor of the falafel place were on “the list”.

Dawson, chastened by the experience, returned to school early the next fall and switched his major to business for which he had neither a flare for nor interest in. For a while, all Dawson wanted was to blend in, hoping eventually that his impeccable behavior would motivate the authorities to remove his name from “the list”. 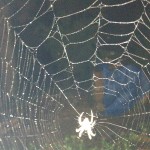