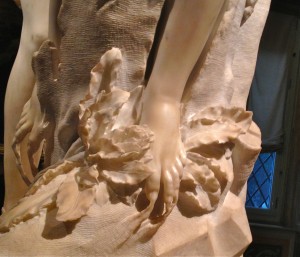 Eros found Apollo incredibly obnoxious — the bully in the playground. Apollo, for instance, sang all those annoying ditties that get stuck in your head, like “Dream Weaver” and “Isn’t She Lovely”. And he’d sing them loudly, without an ounce of reserve — Apollo style. To add insult to injury, Apollo was forever mocking Eros in between one song and the next. So Eros set out to bring Apollo down a peg or two with the only weapon at his disposal, love. It was Daphne’s bad luck that Eros’ lead arrow struck her. Daphne was one of those types of girls who had no interest in dating, fashion or small talk with the guys. She probably didn’t really need the lead arrow to flee Apollo’s advances. He never really stood much of a chance. Maybe Eros’ lead arrow just sharpened Daphne’s resolve.  You just know that when Apollo, in this magic world where a golden arrow leaves men addled, unable to do their job, like ride the sun across the sky, things won’t end well. Despite embellishments, like Daphne turning into a tree simply to escape his grasp, the story, from Apollo’s point of view is this — the guy never gets the girl. You’d like to hope that while playing his flute or fiddle in the shadow of the Daphne tree, Eros would feel, at the very least, a slight twinge of remorse when thinking about how things turned out for the free-spirited girl.